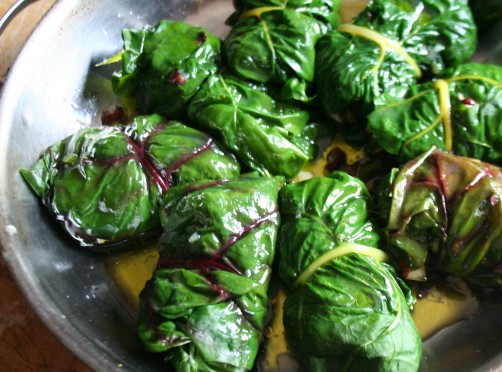 When I opened up my first CSA box* of the season last week, the first thing that I saw was a bundle of colorful Rainbow Chard sitting on top. Besides being so vibrantly beautiful, they were big. Big enough to use in a stuffed roll recipe. I often make a vegetarian Greek stuffed grape leaf, or dolmades, so I decided to adapt my dolmades recipe to make stuffed chard leaves. With my chard as a starting point, I pulled fresh mint and oregano from my garden and then looked to my pantry for black rice (which, like wild rice, has a nice nutty flavor) and some Turkish red pepper flake, called Kirmizi Pul Biber, that my brother just gifted to me. Chop your leftover chard stems, the cleaned leeks and garlic. In a hot pan over a medium flame, add a bit of olive oil, then your pepper flakes. Stir and cook for just a half a minute. Add your chopped chard stem and leeks. Cook for a couple of minutes then add the garlic, salt and pepper. Cook for one more minute then take off the heat. You should let this cool to room temperature.

When your sautéed vegetables are cool, add the rice, the currants, chopped mint & oregano and lemon zest. Check your salt and pepper and adjust if you need to. Placing the rice filling into the center of the chard leaf.

Lay out your chard leaves flat on a clean work surface, “pretty” side down. Take your filling and lay it out in the center of each leaf, dividing the rice-veggie mix evenly between the leaves. You then roll each leaf up into a little packet by folding in the sides first, over the rice mix, then taking the stem end of the leaf and folding that up over the center. Then give the packet a roll toward the top of the leaf. The whole leaf packet should look like this… Put a bit of olive oil at the bottom of a large skillet (one with a lid, preferably). Put your chard packets into the skillet, then drizzle with ¼ cup of olive oil and the lemon juice. Pour your broth in then place the covered pan onto a medium-low heat. You should leave it undisturbed for about 20 minutes, or until most of the broth has cooked out. Remove from heat and serve with plain yogurt. I served them as a side dish, topped with plain yogurt. This recipe makes 8 stuffed chard leaf packets – enough for four people as a main course or 8 people as a side dish. This recipe also can revert back to dolmades by just substituting grape leaves for the chard and adding a bit more rice (two cups total), since you aren’t using the chard stems.

*CSA stands for “Community-Supported Agriculture”. It is a subscription service with a local farm or garden, where you pay a fee and they will deliver a weekly box of fresh produce that they harvested from their farm. There are many CSA’s and you can find one locally by going to http://www.localharvest.org