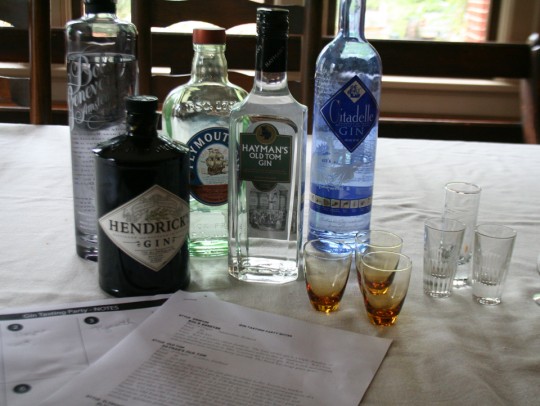 Here in Decatur, we are a social bunch. My girlfriends and I often get together to share a cocktail or two. Like me, they are pretty adventurous with food and drink so they’re usually up for trying any new cocktail that I throw at them. It’s probably why I love them so much. Months ago, I was out with a few of these friends and we were lamenting the decline of our latest book club. It turns out, that one of the women at the table had a book club that gradually turned into a food and cocktail club. They had just met for a gin tasting. She told us that she had learned a lot about gin and that it had been a lot of fun. We all thought that this sounded like a brilliant twist on our usual neighborhood mom get-togethers. Since I’m Miss Cocktail, it was decided that I needed to be the one to host it.

Feeling the weight of responsibility, I began my research into gin. I found out right away that there were five distinctive styles of gin: London Dry, Plymouth, Old Tom, Dutch or Genever and New American or Western style.

WHAT GINS TO CHOOSE FOR A GIN TASTING

Most of us, when we think of gin, are thinking about a London Dry style – a dry mix of citrus peel, angelica, cassia, coriander and other botanicals that serve as a background to a predominant juniper flavor. Gins like Gordon’s, Beefeater, Bombay and Tangueray fall into the London Dry category. If you want to make a classic gin cocktail, London Dry style is usually what you reach for first.

Plymouth gin is really just a London Dry style gin, but slightly more sweet. And like champagne, it is a spirit that has a geographic distinction. It can only be called a Plymouth Gin if it comes from the Plymouth, Coates & Co. distillery in Plymouth, England. It has an earthier taste and more subtle juniper tones.

Genever is the oldest gin style, developed in Amsterdam in the late 16th century.  It has a very different taste than London Dry gin. Unlike most gins, it is made with a mostly malt wine base and is a sweet gin.  It is really a white whisky. And despite the name, which derives from the Dutch word for juniper, it has only the slightest taste of the resinous berry and is not as aromatic. There are two kinds of Genever gins – jonge (young) and oude (old), which doesn’t refer to age of vintage but styles of distillation.  Popular Genever gins are Bols and Boomsma.

Old Tom gin has a sweetness somewhere between a Genever and a London Dry style. It is an old English style and has a more rounded flavor than London Dry. Old Tom was the gin of choice in 1800’s England. Old Tom gets its name from the wooden black cat signs that hung outside pubs in 19th century England, to signal that to-go shots of gin were available at that location (tom cats). You would walk up to the cat, drop a penny in a slot and the gin would come out of a pipe between the cat’s paws and into the open mouth of the customer. Old Tom gin is the original style gin used for Tom Collins and where the cocktail gets its name. Old Tom varieties available here are Hayman, Ransom and Secret Treasures.

This is a new, catch-all category of new artisanal gins that have been developed over the last 15 years. They are modern and more experimental with the botanical flavor profiles.  For example, Hendrick’s, the Western style gin that we tasted, has a predominant cucumber and rose petal taste. Brands included in this category are Aviation, G’Vine and Berkshire Mountain. I invited a bunch of my book club girls over last Friday night for a formal gin tasting. I bought several bottles and then a few people contributed their own gin selections.  We ended up with 8 different gins to try. For our tasting, we sat down with pencil and paper, some lovely appetizers, small shot glasses, water & rinsing bowl and our 8 bottles of gin, ready for small pours. We started with the more subtle, least juniper-tasting gins first and progressed to the standard London Dry varieties that we all know. After we did a straight tasting, we had half-size cocktails to try the newly-found favorites in Aviations and Tom Collins.

So here are the 8 gins that we tasted, in order: The gin tasting in full swing

Within our group of 10 people, we all came away from the gin tasting with different favorites and different least favorites. We all agreed that the London Dry style gins – Bombay Sapphire (both kinds) and the Beefeater – were exactly how we think a gin should be. Nice, dry and juniper-forward. These reaffirmed our love for that classic style of gin. I would use any of these to make a classic gin cocktail, especially martinis and gin & tonics.

In the London Dry category, the Bombay Sapphire selections really shined through. Bombay Sapphire East is supposed to be more of a New American style gin, with added pepper and lemongrass. Because we tasted it last, I was having a hard time telling the difference between the two, but several people caught the extra pepper and noted that the Bombay East was spicier.

There were definitely some surprises that came out in the tasting. The Bols Genever was probably the most different from any of the other gins. If you are not a gin drinker (like my husband), there is a good chance that you will like this. It has a surprising tequila-like taste, but with a silky, smooth texture. You get more of the malt wine taste than you do the botanicals.  It was very nice. I would definitely use this gin in a martini or even just straight up for sipping.

The Hayman’s Old Tom was the favorite of some. A lot of people described it as smooth and just slightly spicy. It is a sweeter style, so I would use this in a Tom Collins or a French 75 cocktail.

The Scottish gin, Hendrick’s, was in a category all it’s own. Like the Bols Genever, Hendrick’s is a gin for people who don’t normally like gin. It has a distinctive cucumber taste with very little juniper. Tasting notes included “floral” and “spicy”. I think it would make a great Gin & Tonic. It’s often noted that Hendrick’s should be served with cucumber as a garnish, instead of lime.

The other big surprise for us was the Citidelle, a French gin. I’ve seen it classified as both a London Dry and a Western style gin. It is a dry gin which boasts 19 different botanicals and  has a peppery bite. You can clearly taste the cinnamon, citrus and juniper. It think it was everyone’s favorite. We made our Aviation cocktails out of the Citidelle to close out the evening and they were fantastic.

One note about the tasting. Because we had to make our way through 8 different gins, we  only did thimble-sized pours for each round of the tasting. We were also careful to pace ourselves and eat a bit of food between each one. This was not only to clear the palate, but to keep our sobriety in check.

I think that everyone, myself included, came away with a new appreciation of the varieties of gin and how cocktails can highlight the strengths of each. So, now we’re wondering what could come after a gin tasting. Tequila?

One thought on “Gin Tasting for my Book Club crowd”